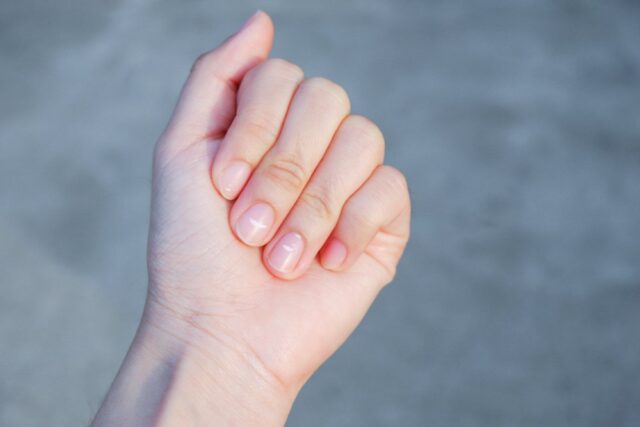 You know your fingernails like the back of your hand (ha), so you might be surprised when changes pop up. White spots on nails can look like little dots or cover almost the entire nail: Leukonychia is the medical term for white spots on nails, and it can be broken down into two main categories. There’s “true leukonychia” (spots on the nail plate itself) and there’s “apparent leukonychia” (spots that look like they’re on the nail, but they’re actually on the nail bed skin underneath). And there’s one quick test you can do right now that will tell you if the spots indicate something serious.

What do “true” white spots on nails mean?

Most of the time, white spots on nails are just a sign of trauma. When you bang your nail on a cabinet by accident, the nail-making tissue under your skin gets interrupted, says Chris G Adigun, MD, FAAD, a board-certified dermatologist in Chapel Hill, North Carolina. Nails take a long time to grow, so you’ll probably have forgotten all about the bump when you start seeing spots. “By the time you see any kind of change in your nails, the event that caused it actually happened months before,” says Dr. Adigun.

In rare cases, true leukonychia could also be a sign of poisoning from arsenic or other heavy metals, which can cause parallel white bands called Mees lines. But those were more a thing of the past when people were drinking tainted well water; most true leukonychia these days is benign, says Ivy Lee, MD, a dermatologist in Pasadena, California and assistant clinical professor of dermatology at UCLA.

What do “apparent” white spots on nails mean?

Two common types of apparent leukonychia are Terry’s nails, which look almost completely white, and Lindsay’s nails, which are sometimes called half-and-half nails because they’re white on the bottom and reddish or brown on the top. Both tend to be associated with serious health problems like kidney, liver, or heart problems. The diseases interfere with the veins in the fingertips, making the nail appear whiter.

To figure out if the white spots on your nails are apparent leukonychia, press on the nail. If the white spot stays there, it’s on the nail itself—that’s damage to the nail and generally its no cause for concern. But if the whiteness disappears or changes color, it’s coming from the nail bed skin and it could indicate a more serious health concern. “That’s a great quick and easy test,” says Dr. Lee.

But don’t get too freaked out if you’re healthy and your nails are looking white—that colour change won’t be the first symptom to show up if you have a serious disease. Usually, dermatologists will look for Terry’s nails or Lindsay’s nails as a diagnostic clue for someone who’s already in the ER with more worrying symptoms, says Dr. Lee. If you’re more worried about your nail texture, learn what peeling nails could mean.

Could white spots on nails mean anything else?

Some types of fungus can also make the nails look white, but they’re not in the same category as leukonychia. Like true leukonychia, they won’t go away when you press them, but they have their own characteristics. They’ll feel a bit powdery, and “you can almost scrape it out from the fingernail,” says Dr. Adigun. In that case, talk to your doctor about an antifungal treatment to bring your nails back to normal. Keep an eye out for these other things your fingernails can reveal about your health.