During this pandemic, you hear about folks making the most of their extra time by learning a new language or starting a vegetable garden from scratch. Me? I’m using the opportunity to switch to natural deodorant.

If that sounds underachieving, consider this.

Ever since I was a kid, I’ve been a sweaty person. Even at 34, I’m still hyper-aware of my body odor and have harbored serious doubts about natural deodorant being up to the job. Nevertheless, I know it’s a healthier choice. Conventional antiperspirants use aluminum and parabens—among other chemical ingredients—to plug pores. Natural deodorants, on the other hand, rely on botanical ingredients that allow the good bacteria in your pits to flourish so that—eventually—you’ll be less stinky than before. (Here are some deodorant mistakes to stop making now.)

The keyword there is “eventually.” From everything I’ve read on the subject, there’s a transitional phase (complete with transitional smells) as the botanical odor blockers work on your body chemistry. Apparently, it can take up to four weeks for your natural deodorant to kick in—if it does at all—which made our current state of social distancing the perfect time to try this switch. 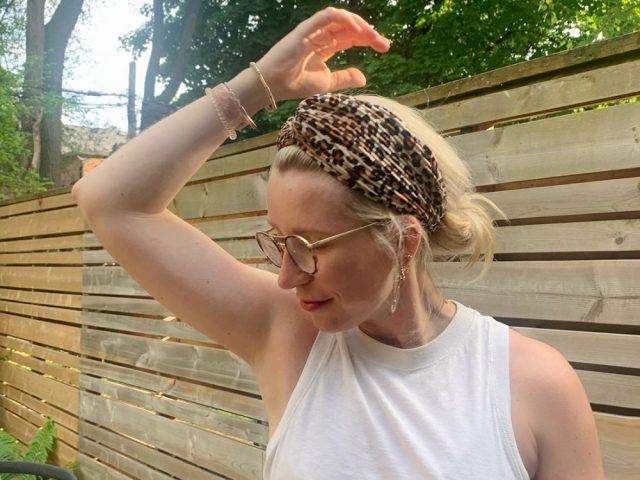 My first challenge was to choose a natural deodorant that wouldn’t irritate my sensitive pits, so I asked friends of mine who preach the gospel of natural deodorant for recommendations in a group chat. One swore by No Pong, a Canadian-made deodorant that uses a blend of coconut oil, beeswax, and baking powder. The ingredient list looked promising, but it lost me at the application: the creamy formula comes in a tin and has to be massaged into your pits by hand. No thank you.

Another vouched for Vapour AER Next-Level deodorant in Palo Santo Blood Orange, which sounded luxurious—and had a price tag to match. $30 for a stick of deodorant? Hard pass.

The final recommendation was Weleda’s Citrus 24h roll-on deodorant. It turns out it’s available at my local grocery store, comes in a roll-on format (my fave), smells like a citrus-forward gin and tonic (another fave), and costs less than $10. I had my winner.

(Try our quiz to find the best natural deodorant for you.) 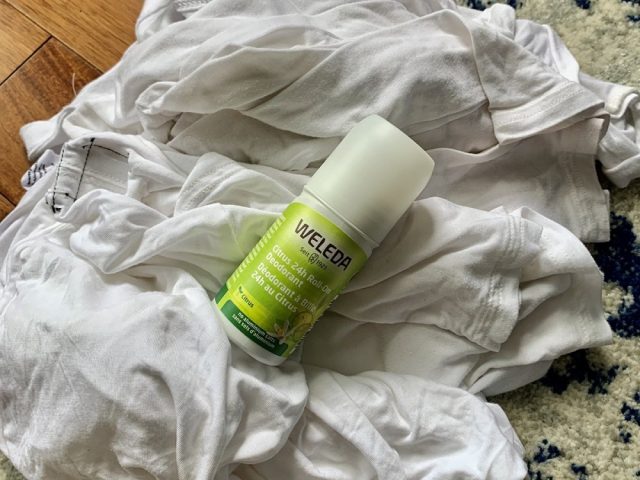 This natural deodorant wasn’t in for an easy first day on the job. Having just moved into a new home, I’d planned some serious painting projects that would truly put this product through its paces.

Post-shower, I gave my underarms several passes of the roll-on. The first sign I overdid it was my husband asking if I was wearing a new fragrance when I walked by. This coming from a man who is “nose blind” to most scents.

Alas, that heavy, heady scent was not to last. As I moved around the house with my paint roller, I noticed a funky smell start to crop up around midday. With my arms over my head for most of the day, there was no concealing it—the funk was turning into stank. I promptly applied a second coat (of natural deodorant, not paint) and it was smooth sailing for the rest of the day.

Not bad, all in all. My workouts are normally pretty fierce, but the painting had me sweating even harder than my regular routine, so I was prepared to cut the deodorant some slack.

For the most part, week one went—and smelled—pretty good. Week two, however, is when the stank hits the fan.

Is this how much human beings actually sweat without antiperspirant, I wondered? By this point, I was sweating so much, I was having to change my shirt by noon every day. It wasn’t just the discomfort of feeling like a moist rag—I smelled like one too. The smell was familiar, but it had been a while since my own body odor had filled my nostrils with such intensity, triggering long-forgotten shame and anxiety that I hadn’t known since I was in middle school.

I texted a friend who had recently transitioned to natural deodorant and asked her if the excess sweat as normal. She assured me it was all part of the process and explained that since I’m not using antiperspirant anymore, my sweat glands are no longer blocked. The unclogged glands are now overcompensating, producing more sweat and, in turn, generating more odor-causing bacteria. “It’s only temporary,” she said soothingly, suggesting that I wash my underarms with soap and water when things start to get smelly in order to keep the bacteria at bay.

I ended up buying a charcoal soap from Kaia Naturals that are designed to pair with natural deodorant. I discovered that washing my underarms before applying my roll-on really cut down on the smell, but the sweat itself was still coming in hot.

(Find yourself extra sweaty this summer? Here’s how to sweat less.)

By the start of week three, my B.O. had begun to fade, but the excessive sweat was still an issue—especially after my morning run.

Running had been my salvation during the quarantine. Every day at 6:30 a.m., I’d pound the pavement for a meditative sweat sesh. Trouble was, several hours after I’d got home and showered, with a fresh coat of natural deodorant applied to my squeaky clean underarms, my sweat glands were still flowing like faucets—and I was tired of it. I’m not going to lie; there were a few moments when I was tempted to reach for my husband’s antiperspirant. I just wanted to smell good again.

I reached out to my natural deodorant support group via chat and told them I was heading for a relapse. Everyone told me to stay the course, but I needed a solution—stat. Perhaps realizing how close I was to falling off the wagon, a friend who’s a yoga instructor suggested I try an “armpit detox.” She swore to me that the detox—a do-it-yourself topical solution—helped change the way her body responded to aluminum-free products. I was skeptical, but also desperate.

After some light Googling, I settled on an armpit detox recipe that sounded harmless enough: 1 tsp of apple cider vinegar (is there anything it can’t do?), 1 tbsp of bentonite clay (available at most health food stores), and 2 tbsp of water, mixed into a paste. I whipped up a batch, applied the paste to my pits—and then realized I’d have to keep my arms raised for 20 minutes. Cut to me lying topless on the bathroom floor. After only five minutes, however, my underarms were on fire, so I jumped in the shower to wash it off.

The attempt at the “detox” was an epic fail that left me with underarms that weren’t just read and stinging but now reeking of apple cider vinegar. 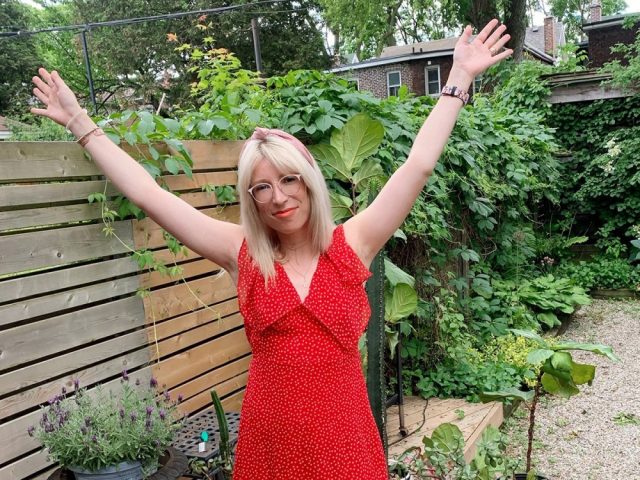 Around day 22, things started to balance out: the amount I perspired was noticeably returning to normal, and my natural deodorant was keeping pace during the day. By the evenings, however, I would occasionally catch a faint whiff of my brand of body odor, which means that post-pandemic, I’m going to have to pack a roll-on in my purse for a midday emergency “pit stop.” As inconvenient as that might sound, I’m willing to take that extra step to limit the amount of potentially harmful chemicals in my grooming routine. I’ve come to accept that a natural deodorant will probably never be able to mask my body odor entirely, and it certainly can’t stop or even reduce sweat. For now, I’m okay with the added moisture and the need for afternoon reapplication. After all, a little B.O. never hurt anyone—especially when you’re living with someone who’s nose blind.