With over 1000 media credentials issued, the Academy Awards is always a highly anticipated fashion event by both the public and the media, and this year did not disappoint. Stars flocked to the Dolby Theatre in LA, California but not before posing for the cameras on the red carpet.

As predicted some stars opted for the classic Hollywood gown including A Star is Born actress Lady Gaga offered up old school glamour in a black strapless Alexander McQueen gown paired with sparking Tiffany & Co jewellery. The singer’s choice was a surprising shift from her famously controversial style, but still hinted to the avant-garde with an unusual silhouette featuring exaggerated hips. Accompanied with long leather gloves and a sleek up-do, the look was reminiscent of silver screen starlet Audrey Hepburn. 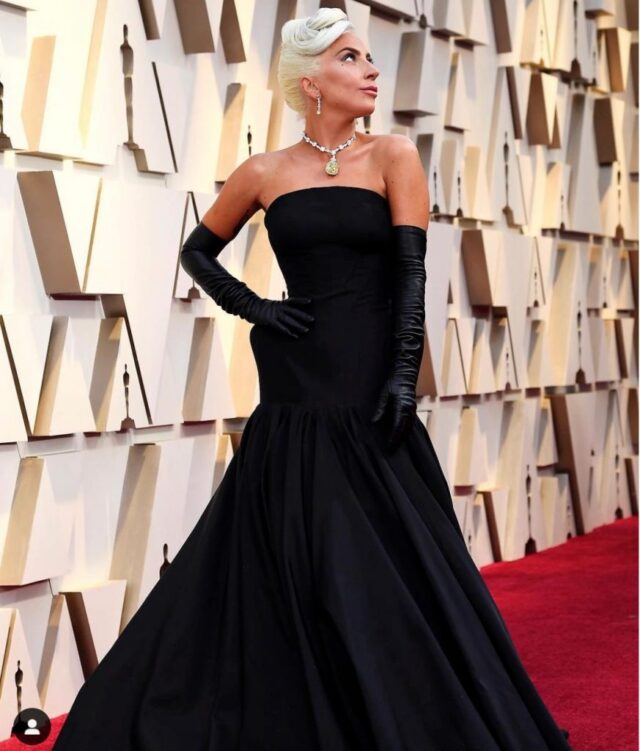 Regina King appeared elated as she posed with her award in a white strapless Oscar de la Renta dress with draping detail below the waist and a daring slit exposing one leg. The If Beale Street could talk star went home with Best Supporting Actress for her performance in the film.

She did it. Meet this year’s winner for Best Supporting Actress, @iamreginaking. #Oscars 📷: @jefflipsky

Model Ashley Graham continued the Hollywood theme in a fitted fishtail gown by Zac Posen. Graham was also one of ABC’s official hosts for the red-carpet coverage.

There seemed to be a recurring pink theme on the red carpet, with multiple actresses favouring a hot pink hue. Crazy Rich Asians break-out star Gemma Chan floated down the red carpet in a ruffled Valentino number with hidden pockets which, according to Diet Prada, she used to hold her cookies for later. Pretty and practical.

Other stars sporting a fuchsia frock included Helen Mirren and Linda Cardellini both in Schiaparelli, Angela Bassett in Reem Acra and Sarah Paulson in Brandon Maxwell.

sarah and I rock Pink

Hey Everybody, you good? Just hanging with my boo… #oscars #ainthecute

No red carpet would be complete without a head-to-toe sequin dress. Jennifer Lopez showed off her seemingly un-aging figure in a blindingly reflective, high-necked Tom Ford gown. While Amandla Stenberg, who is the youngest person to ever present the Best Picture award, graced the carpet in a feminine, nude 1920s-style Miu Miu flapper gown.

Best Supporting Actress nominee Emma Stone was photographed in a Louis Vuitton gown that reportedly took 712 hours to make according to the designers. The russet toned sequins engulfed the dress which complimented the star’s copper hair, and as if the sequins weren’t enough, the dress also featured impressive shoulder pads.

WHAT A GODDESS WHAT A VISION WOW I CAN’T. #emmastone #oscars2019

The stars continued the celebrations after the awards show at the Vanity Fair afterparty, for most this meant an outfit change, ending the magical night on a sartorial high. The gilded evening held at The Wallis Annenberg Centre for the Performing Arts in Beverly Hills, unsurprisingly had a star studded guest list

Speaking of leaving little to the imagination, Big Little Lies actress, Zoe Kravitz was photographed arriving in nothing but a full length Saint Laurent skirt and Tiffany & Co 18k gold bra. With a price tag of $24,000 it gave Lady Gaga’s glimmering jewels a run for their money.

Actress Melissa McCarthy, who whilst presenting the Best Costume design award made an unsubtle joke about the discipline, went from tailoring to tracksuit in a black Adidas two-piece. The two-time academy award winner matched with husband, Ben Falcone.