12+ Best Bicep Exercises With Dumbbells For Men In 2020

Let’s face it, if you’re looking for a triumphant post-isolation return to the gym, chances are you are going to start with the biceps. The beefy, front-arm section is a concentrated muscle group that suggests strength, and demands respect. Large biceps muscles are the calling card of the gym-rat and can work wonders for your general appearance. 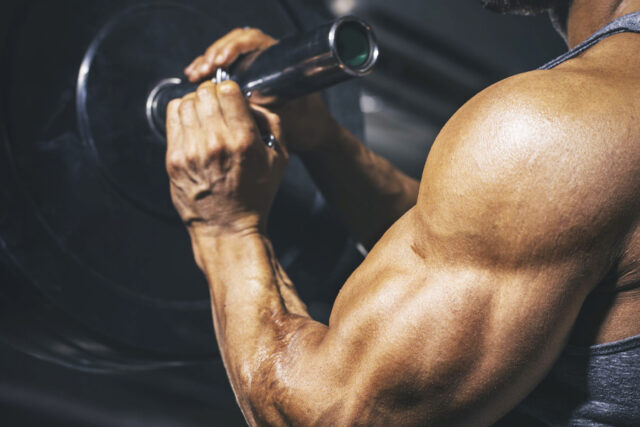 However, regardless of whether you are training to become the next Arnold Schwarzenegger or just trying to look good in a date, it pays to add a few of the best bicep exercises to your workout routine. Beefing up your biceps can assist you in achieving that desirable triangular shape, adding some much-needed girth to your upper body.

Should you be new to the world of bicep workouts, you’ll soon find out that adding mass to the muscle group is a challenging premise. That does not mean that it’s impossible to develop a killer set of biceps, rather that it will require some strict commitment to specialised and isolated bicep exercises. But before we get into the best bicep workouts for you to build the ideal upper body, you should learn what to look out for. 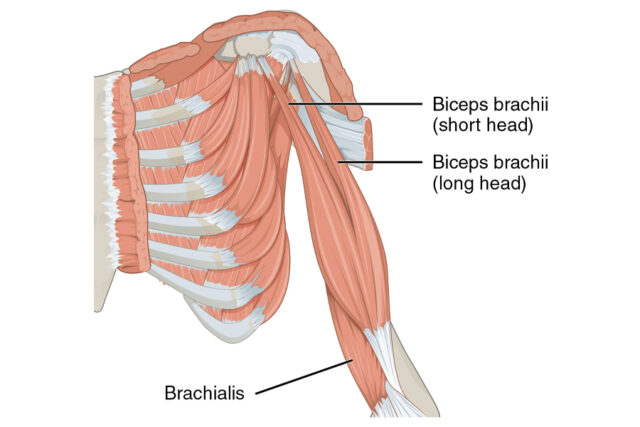 What are Your Biceps?

On a basic level, your biceps are a large muscle group located on the front section of your upper arm. Those we commonly refer to as the biceps are also known by the Latin name biceps brachii (meaning ‘two-headed muscle of the arm’). This muscle group’s primary function is to rotate the forearm and flex the elbow.

As shown by its Latin name, your biceps are divide into two major sections; the long head and the short head. Both heads of the muscle arise from the scapula (shoulder blade) and combine in the middle arm to form a muscle mass.  At each end are connective tissues called tendons that anchor the muscles to bone. Both heads work in tandem to move the forearm, allowing them to rotate 90 degrees. Let’s take a deeper dive into those two heads.

Without going into too much detail, the long head originates from a cavity in the scapula called the glenoid. The head goes through the shoulder joint to the upper arm through a small section in the humerus.

One the other end of the spectrum, the short head starts from a projection on the scapula called the coracoid. It runs alongside the long head on the inside of the arm.

As mentioned above, the primary function of the bicep is to flex the elbow and rotate the forearm. Despite what you might think, however, the biceps are not the most powerful flexor of the forearm. Instead, the muscle group serves to hold up and stabilise the deeper brachial-is muscle for greater movement and strength.

Anatomy-aside, the best bicep exercises would help you to increase your muscle mass, strength, stability, and aesthetic appeal. Adding these movements to your overall fitness regime can elevate your routine from a basic gym-goer’s attempt to one of the best bicep workouts on the planet.

Here are the 13 best bicep exercises for men.

You definitely would have attempted a Barbell Curl at some point in your gym career, however, incorporating a reverse grip can significantly bolster your bicep workout. When you curl a weight with an overhand grip, you put further strain on the often underused brachioradialis. The Standing Reverse Barbell Curl is a great way to get your bicep muscles working, but remember, you don’t need to go heavy with these ones. Light weights will definitely do the trick. To perform Standing Reverse Barbell Curls;

When you’re making a list of the most important bicep exercises to add to your workout regime, you simply cannot ignore the dumbbell curl. One of the most iconic and simple movements, curls are great for activating your forearm and upper arm muscles. However, research published in the Journal of Sports Science and Medicine shows that the Seated Alternating variation is the best version of the iconic bicep exercise. This take reportedly activated your biceps far better than other curl variations.

As with most lifting, the heavier the weight, the stronger your biceps will get, however, it is important to make sure you contract at the top of the movement. To perform an a Seated Alternating Dumbbell Curl properly;

Forget what you think you know about cable-work. Cables are actually a great way to work out different sections of your body, in particular, the bicep brachioradialis. The Standing Cable Curl allows you to keep consistent resistance, increasing the strain on your muscles and giving you a far more efficient bicep workout. To perform Standing Cable Curls;

Once you’ve got the more complex curl variations out of the way, you should return back to the old faithful. The Standing Barbell Curl is traditionally the most common bicep exercise, and for good reason. Barbells allow you to work both arms simultaneously and evenly, which is great for stability and control. To perform a Standing Barbell Curl;

This multi-movement piece is one of the best bicep exercises you can add to your arm arsenal. The Zottman Curl focuses on all three major muscles that make up the biceps – the biceps brachii, brachialis and the brachioradialis. To perform the Zottman Curl;

An isolated bicep exercise, the Concentration Curl allows you to focus solely on building significant muscle mass to the core section of your upper arm. You will need a dumbbell for this one and while going heavy is always helpful in building muscle, it pays to do as the name suggests and concentrate on the contraction. To perform a Concentration Curl;

Another cable exercise, the Cable Flex Curl is a great way to keep tension on your biceps while alternating flexed muscles. Even just holding your arms in this position will give you a bicep workout, however, the added flex will throw your muscles into overdrive. To perform Cable Flex Curls;

A favourite of the Austrian maestro himself, the Preacher Curl zones in on your front-arm muscles, helping you add some serious size. This isolated movement is fantastic for stability and upper arm mobility. To perform Preacher Curls;

This may seem like more of a back exercise than one of the best bicep exercises, however, it’s the upright position that really takes the Seated Cable Row over the top. When you sit and row, your biceps are in the direct line of the pull, meaning they have to work harder to maintain stability. To perform Seated Cable Rows;

Similarly, the Bent Over Row activates the bicep and upper body muscles due to its ‘pull’ movement. For this bicep exercise, it pays to add a bit more weight and try to go heavy. To perform the Bent Over Row;

Tips for the Best Bicep Workout

If you’re ready to head into the gym and get your arms back to their biggest and best, adding these bicep exercises to the mix will certainly help your growth. But that’s not to say the movements are foolproof. In order to get the most out of your bicep workout, you should consider these key pieces of advice.

We get it, nobody likes to warm up. It’s boring and adds a bunch more time to your workout, however, if you do choose to add a quick stretch-sesh, you’ll notice the difference. Warming your muscles up, with light weight mobility movements or simply through stretching allows you to increase the blood flow to your muscles, meaning more oxygenation and a bigger pump.

As all of the workout descriptions explain, it is pivotal that you squeeze at the top of each muscle contraction. This allows you to focus on the tension on your bicep, working to break down the muscle fibres and help you build muscle mass.

Depending on your specific style of training, your rest periods will play a significant role in your bicep workout. When it comes to straight muscle growth, it pays to rest more. By resting upwards of two to three minutes, you can ensure your muscles are fully repaired, meaning you can lift at full capacity and achieve your bodybuilding goals.

What is the best exercise for activating your biceps?

While the bicep curl is probably the most traditional bicep exercise, the concentration curl has been shown to activate more parts of the body, making it the ultimate bicep exercise.

How often should I train biceps?

While there is no hard and fast rule when it comes to training, you should allow for at least one day’s rest between muscle group sessions. You can train biceps on non-consecutive days.

Why are my biceps not getting bigger?

When it comes to a lack of size in one particular area, it generally comes down to one of two factors. The first is the lack of food. If you want to weight more, you have to eat more, thus eating more lean protein will aid in your muscle development. Second, you should work on breaking down the bicep muscle fibres. Lift heavier weights and focus on more intense workout regimes.